Maritime transport: The goose that lays the golden eggs? 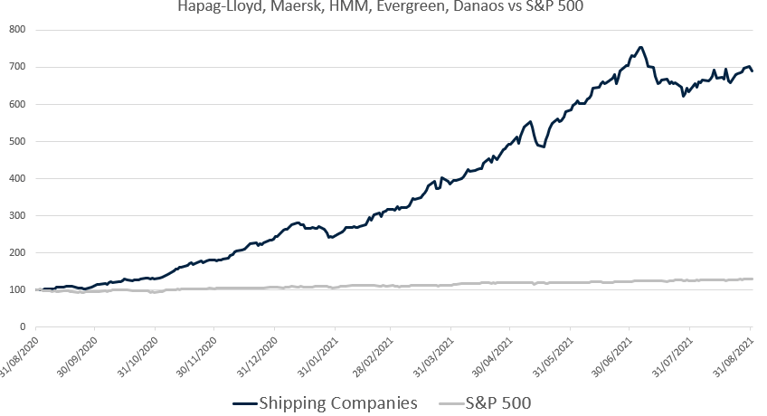 The rising cost of maritime transport is one of the main concerns of importers right now. This rise in costs is also having an impact on consumer goods, with widespread price increases that, if sustained over time, will translate into inflation.

Container shipping costs have multiplied by 5 since last year. 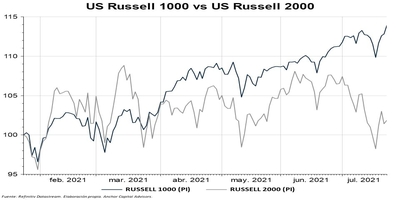 At the end of July 2021 we can say that the economic recovery has had a favorable effect on financial markets. The S&P 500 and the MSCI World are up 17.5% and 14.38% respectively. In general terms, the forecasts are good for the second semester of the year according to the consensus, since economic indicators continue to rise and monetary and fiscal policies do not seem to show signs of retreat in the short term.

In this context, we see that small caps have lagged behind. So far this year, the Russell 1000 index (the thousand largest companies in America) has gained 14%, while the Russell 2000 (the two thousand with the smallest capitalization) has barely achieved 1.8%.
END_OF_DOCUMENT_TOKEN_TO_BE_REPLACED
0 Comments Click here to read/write comments

The most recommended companies for the remainder of 2021

Not even analysts have the crystal ball for predicting whether a stock rise or fall in the future, but it is true that their vision of the company is an informed opinion.

Here are the companies that analysts are most optimistic about:

Value, Growth and a table. 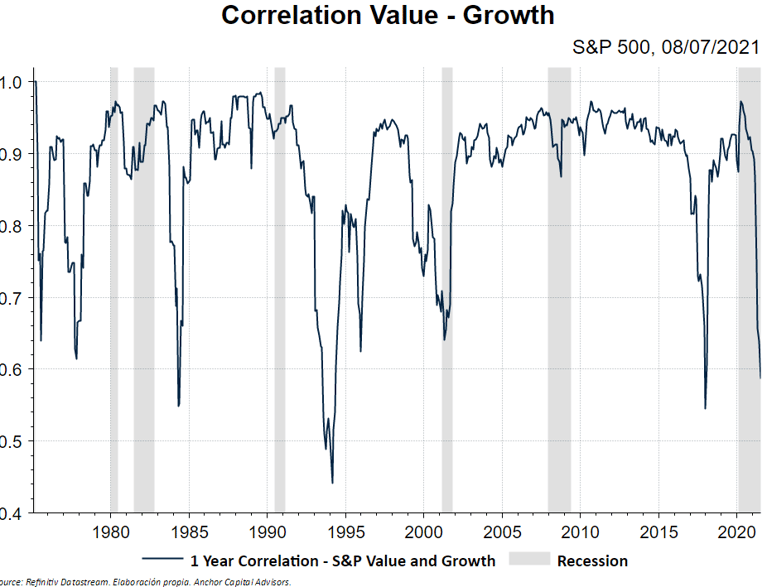 Value and Growth are two buzzwords, but what do they mean? Well, since we. the people who give meaning to the words, by itself, neither Value and Growth mean anything beyond what each one interprets.

If we talk about words that describe simpler objects, the meaning is clear: most of us will agree on the interpretation of the word "table", since it has a more or less clear representation in the real world for everyone.

Although, as in everything, there may be exceptions, since some may interpret that a certain object is a table (perhaps a table of unimaginable design in a bizarre way) and others not, since their mental concept of "table" does not include an object. that does not correspond to a table and four legs. In any case, we will all agree most of the time with the concept of "table".

The same is not the case when we talk about Value companies and Growth companies, since each one defines it a little as he wants.

This has made the debate between these two investment styles back in vogue. Also, the fact that Value is doing better in relative terms, something unusual in recent years, has fueled that dispute.

Will staunch Value Investing advocates outperform Growth investors this year? At the moment, it seems that they are tied. 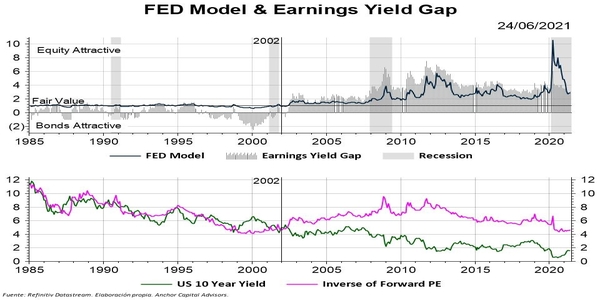 The rally in the American stock market from 2010 to 2020 (the longest in history), and since the pandemic so far, makes us wonder if it is a good time to invest in equities or if a correction is looming.

Welcome to our Financial Markets Blog. Here we talk about everything we think is important to the investor, even if it is not comfortable to explain.

Subscribe now to not miss any of our publications